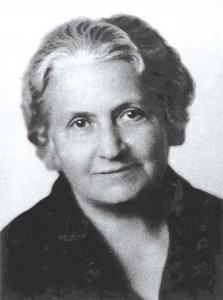 Maria Montessori (1870-1952) was an Italian doctor and pedagogue. She developed her educational method on behalf of scientific observations of the infantile learning process. As an assistant doctor, she first came into contact with disabled and disadvantaged children and discovered, that through the stimulation of the senses the children’s intellectual abilities could be raised and she transferred this experience to the education of healthy children. She emphasised, that the most important period of time in the life of a human being is the period of time between birth and the 6th birthday. During this phase the child’s physical abilities, the intelligence and the psychological strength are established. These are the basis for the further development of the adolescent. Based on her knowledge, new forms of education and didactic materials were developed, which gave room to the infantile research and development urge. In order to implement her pedagogic goals, children’s houses and schools were founded, which are spreading more and more.